Leave a comment
By brianeden The Early Posts, Uncategorized

Rhett Miller Concert and Other Stuff

It was ok. The sound levels were kind of off, so the instruments were drowning out the vocals. Also, his back-up band wasn’t great. The lead guitarist looked like a creepy Dennis Quaid who didn’t blink. Ever.

More importantly, I discovered a new musician by the name of Nicolai Dunger. 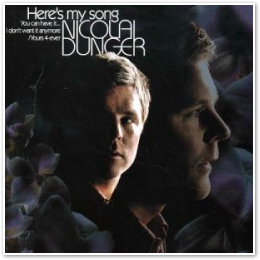 Nicolai Dunger’s music touched me in a way no other music has ever done before.

It punched me in the head.

According to his website, Dunger’s vocals are described as “aching.” Well put. The only thing worse than Dunger’s music were his lyrics:

Yes, you read that right. The children lick my soul.

Which, as we know from Department of Homeland Security Deputy Press Secretary, Brian Doyle, can land you in prison for up to 115 years.

In other news, Natty is completely stir crazy. She’s not allowed to run or jump or play while her stitches are healing and she’s bouncing-off-the-walls-bored. On Thursday she resorted to tossing ice cubes in the air and trying to fetch them for herself. It’s gonna be a long 9 days.

Tonight is my cousin’s wedding. I’ll be wearing a tuxedo meant for a very very very fat man. Hot.

FOOD UPDATE: Made an omelet with mushrooms, green pepper, onion and parmesan for lunch. It didn’t look pretty, so I didn’t take a picture.