Kayak for a Cause VI – The Big Day! 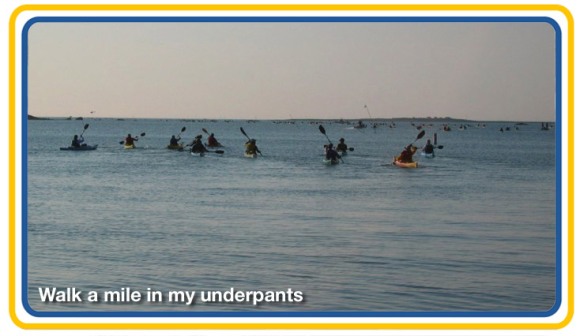 You’re reading this because I didn’t die.

The alarm went off at 5:30 this morning. I grumbled out of bed, and tossed the pouch of Maxwell House on the in-room Mr. Coffee maker. Then got changed, brushed and deodorized. A few sips of weak coffee and I was on my way.

They had a breakfast spread at Calf’s Pasture Beach. But it was all fruit, yogurt and granola. How’s a guy supposed to paddle for 13 miles without an omelet station and fluffy buttermilk pancakes?!?!?!

I sucked it up and poured a bowl of protein-infused granola. (Hoping that the protein infusion might help me to not die.) They also had fresh squeezed orange juice. So I grabbed the plastic jug. And that’s when it happened:

I cut my finger on the handle.

Now, a lesser man might’ve called it quits right there.

A lesser man might’ve even cried.

(Okay, maybe I cried a little.)

I looked down at the centimeter-long paper cut on my index finger and winced.

Maybe it was the adrenaline. Maybe it was sheer determination. But I pulled myself together, grit my teeth, and somehow found the strength to keep going.

I took a deep breath. And poured the rest of the orange juice in my cup.

With that small victory under my belt, I was ready to take on Long Island Sound. So I grabbed my PFD and headed down to the beach. (A PFD is a Personal Floatation Device. Also known as a life jacket. For some reason kayak people insist on calling them PFDs. “Some reason” being that we’re dorks.)

Once I stepped out onto the beach, I was greeted by a very welcome surprise: 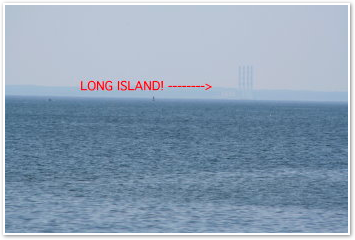 Not sure how I didn’t see it yesterday. Especially with the giant red LONG ISLAND sign floating in the sky.

I guess it was too hazy yesterday. But on a clear day, you can see Long Island after all. Not well, mind you, because it’s really really really far away. (this picture is taken through my telescopic 300mm zoom lens) But it was there nonetheless. I breathed a very small sigh of relief.

There were 320 people paddling across Long Island Sound today. So, to keep track of everyone, they broke us down into “Pods” of 10-12 people. A “pod” is very similar to a “group.” The difference being that a “pod” is defined by “nerds.”

Each pod was assigned a “Pod Leader.” The pod leader serves as the point person who can signal the rescue boats in case of trouble. He also serves as the fall guy in the event that aliens land and demand to be taken to my leader.

Here are some pictures from the beach before we launched. (And by “launched” I mean “got in the water.”) 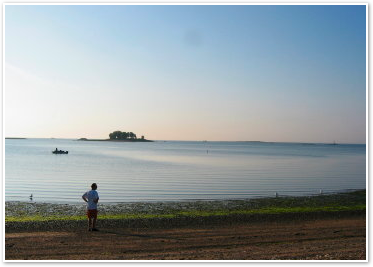 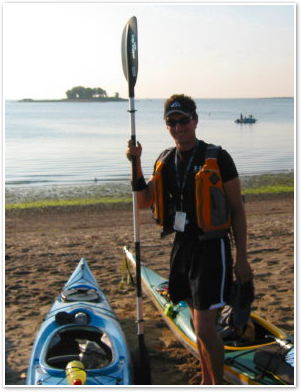 (Notice that I managed to smile despite the gaping wound on my finger.) 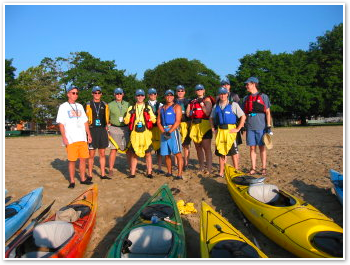 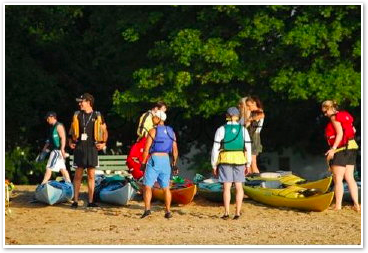 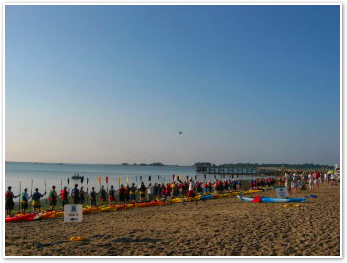 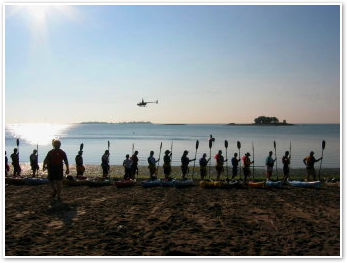 After photo ops, we carried our kayaks down to the edge of the water and took off for Long Island. The tide was very calm. 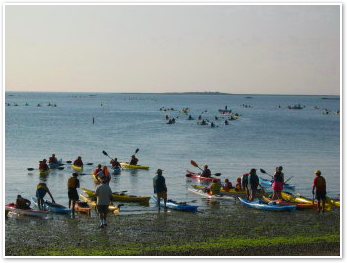 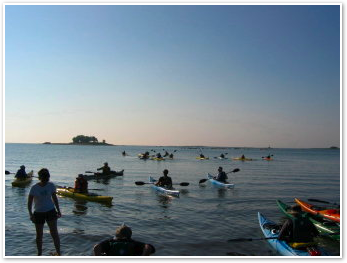 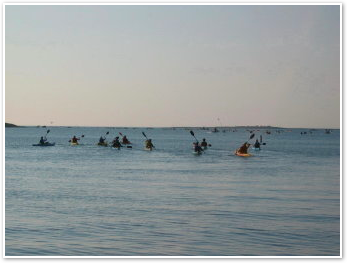 Unfortunately, that only lasted for the first mile or so. Once we got out past the Norwalk Islands lighthouse, it got choppier. A LOT choppier. 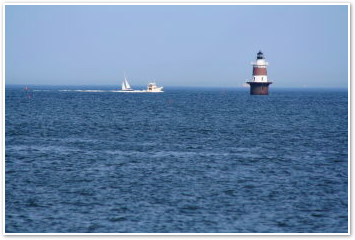 I’ve never paddled on the ocean, but I imagine this was pretty similar. You definitely had to pay attention, otherwise a wave could catch you off-guard and flip you. And it’s a lot harder to kayak upside down. (Not that I’ve ever flipped over by accident. I mean… um… I have this “friend…”) 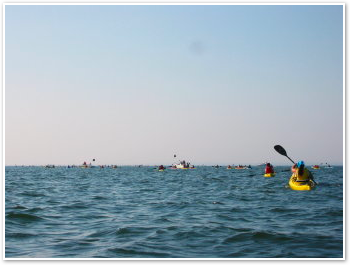 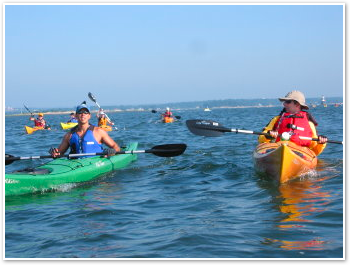 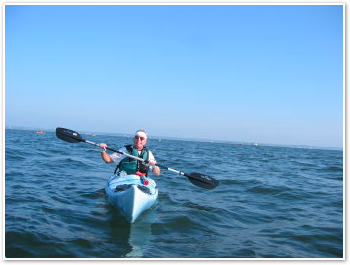 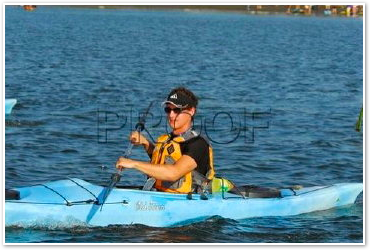 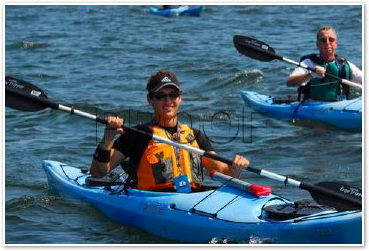 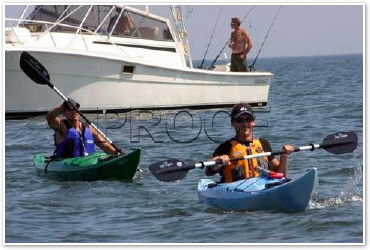 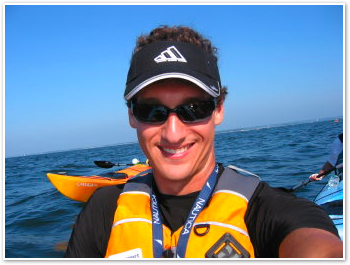 During the next 12 miles, many paddlers capsized to their doom. Several died of scurvy. Others were eaten by sharks. One guy was even eaten by a tiger. (They’re surprisingly agile in a canoe.)

Despite much adversity, several hallucinations, and three and a half hours of complaining that my arms are tired and my ass is asleep, I made landfall on Crab Meadow Beach, Long Island. 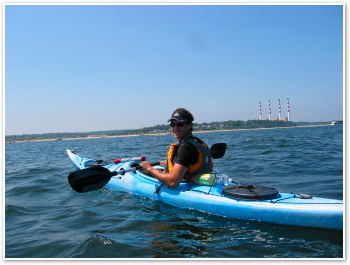 (This is me about to make landfall on Crab Meadow Beach. It’s hard to tell from the picture, but my ass is asleep.)

Once on shore, 320 of us climbed out of our kayaks, collapsed on the beach and kissed the ground. This was followed by 320 of us wiping the sand off our lips and going “Ptooey! Ptooey!”

After a brief and VERY necessary bathroom visit, we bid adieu to our kayaks (That’s French for “put them on a truck”) and boarded the “banana boat.” 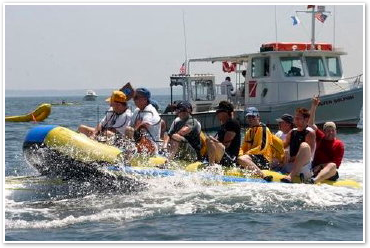 There were no bananas. But it brought us to the “chocolate chip cookies boat.” Which, in turn, brought us back to Connecticut.

The after-party didn’t kick off till 5:00, so I headed back to the hotel to shower and change into something that didn’t smell like trout.

The party was a lot of fun. There was a ton of food, including lobsters, burgers, hot dogs, grilled chicken and flank steak. I did some major damage to the food chain. (Still no omelet station though…)

Here are a few pictures from the party: 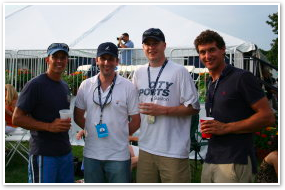 From right to left, me, Ken, Jackson and Terry 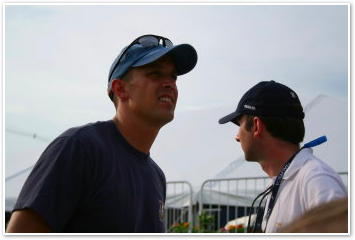 This is what Terry and Jackson look like to a midget. 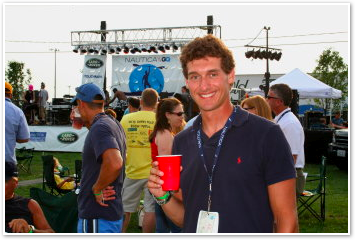 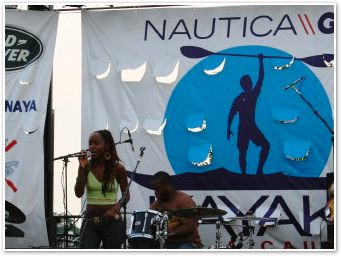 This is the opening band, Audrey Martell. If you like, you can be her myspace friend. 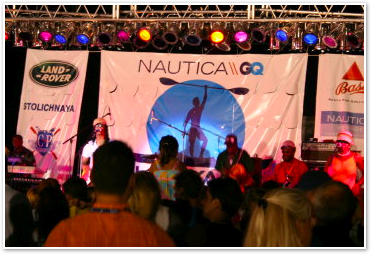 The main act was The Wailers. Of “Bob Marley and the Wailers” fame. But without the “Bob Marley and” part. I don’t think they have a myspace page, so you guys can’t be friends. Sorry.

The party wrapped up at 11ish and so I bid adieu to my pod members (“Hey! Stop that! Stop trying to put us on the truck!”).

I drove back to the hotel, collapsed on the bed and fell asleep with a big, silly grin on my face. Cause I didn’t die.

POST SCRIPT: In all, Kayak For A Cause VI has raised $420,000 and counting. $800 of which came from my awesome friends and family. Thanks everyone for your support!

And guess what? I’m doing it again next year! Here’s a link to my KFAC VII sponsorship page! Donate early! Donate often!

One thought on “Kayak for a Cause VI – The Big Day!”