They serve it with a side of blueberries. Which is weird. But I guess that’s what you’ve gotta expect from a place called The Bourgeois Pig.

After breakfast, I took the El train to Wicker Park. A neighborhood that’s kind of a mix between Fells Point, South Street in Philly, and DuPont Circle in D.C. There are lots of boutiques, coffee shops, restaurants and bars. But no wicker. Talk about false advertising.

Here are some pictures:

Sometimes life catches you by surprise. It certainly did on my trip to Wicker Park.

Because today, while walking down Milwaukee Avenue, I found Jesus.

Actually, I found a bunch of Jesuses. (Jesuces? Jesi?)

Which I took to mean that it was time for lunch.

So I decided to give Chicago Thai food another chance to get chicken right. I went to Pot Pan Thai. To be honest, I don’t really know what I ordered. I pretty much pointed to something on the menu and said “with chicken.”

It was awesome. So from now on, when I go out for Thai, I’m bringing this picture with me, showing it to the waitress and saying “with chicken.”

In the afternoon, I went back to the hotel and took a nap. Chicago is friggin’ tiring! Must be because of the altitude.

For dinner, I made my long-anticipated trip to Rick Bayless’ Frontera Grill. (Rick Bayless is the most renowned Mexican food chef in the country. He has five cookbooks. He’s won the James Beard award. He’s even been a competitor on Iron Chef America. In other words, he’s got mad street cred.)

This is the bar at Frontera:

Every bottle on the bar is a different brand of tequila. The display is intended to represent the diversity of tequilas in Mexico. It also represents the world’s most god-awful hangover.

For starters, I ordered the chips and guacamole. I had to. Anyone who’s been to one of my parties knows that I make Rick Bayless’ guacamole recipe religiously. So I had to try it from the man himself. (Or at least the man’s line cook himself.) 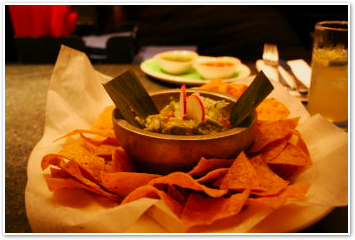 And I must say, his guacamole was better than mine. I’m not entirely sure what he did differently. It was smoother. He put diced onions on top (instead of mixed in? I couldn’t tell if there were onions in it too or not.) Maybe it’s that he can get fresher ingredients. Or that his tortilla chips are homemade. I have no idea. But it was definitely better.

The chips and guacamole also came with two salsas. Salsa verde, a tangy salsa made with tomatillos and cilantro, and a chipotle salsa. Which was made with chipotle chiles and probably roasted tomatoes. They were both very good.

For the main course, I ordered the pork loin. Here’s the description from the menu:

(The picture’s pretty blurry, so just imagine that you’ve just had a few of those tequilas.)

The pork was AMAZING. Absolutely sublime.

Of course, I had to have dessert. First, I ordered Cafe de Olla. It’s coffee brewed with brown sugar, allspice, cinnamon and orange zest. It was really different. It was almost like a mulled cider. But with coffee. I’d go back just for the coffee. 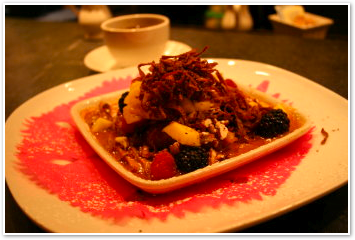 Buttered crepes topped with plantains, blackberries, raspberries, apples, pecans, fried tortilla strips dusted in cinnamon and topped with a goat’s milk caramel. It was awesome. They should find a way to turn it into a scented candle. They’d make a fortune.

After all of that food, I had to take a walk to prevent exploding. So I went down to Navy Pier to get some pictures.

Navy Pier is a huge pier that sticks out into Lake Michigan. It has a Ferris Wheel and other amusement park stuff, plus lots of bars and restaurants. It’s kind of like the Inner Harbor on a pier.

Sheesh. This city and it’s misleading names. Next thing you’re gonna tell me is that the Gold Coast isn’t actually made of gold. 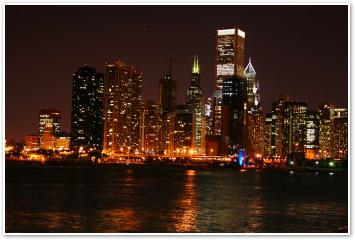 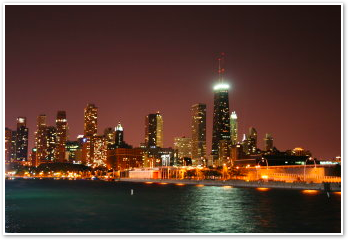 After Navy Pier, I was still in a food coma. So I decided to walk back to the hotel.

I love the lamp posts that line Michigan Avenue. Because, from the side, they just look like lamp posts.

But from underneath, the bulbs look like cartoon eyeballs in the dark.

Walking south Along Michigan Ave, you pass Millennium Park, Chicago’s newest attraction. It opened a year or two ago and cost the city roughly fifteen bazillion dollars. But it was well worth the price. Because it has these weird green monolith things. 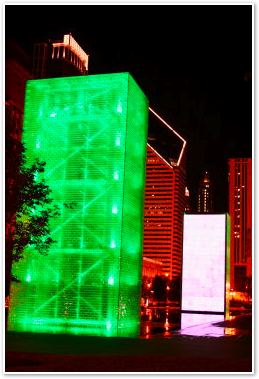 What other city can say that? Certainly not you, Oshkosh Wisconson!

I was waiting for the monkeys from 2001 to run out and start hitting the monolith with sticks. It didn’t happen.