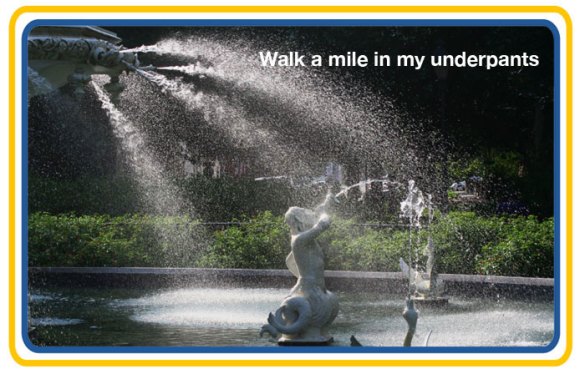 In refreshing contrast to I-95, Route 17 through the South Carolina Lowcountry is a very scenic drive. The highway skims through salt marshes and lush forests that seem to grow straight out of the water.

The route is dotted with stands selling peaches, boiled peanuts and other, um, “unique” shopping opportunities. 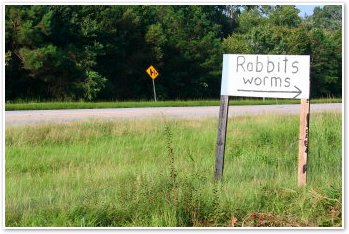 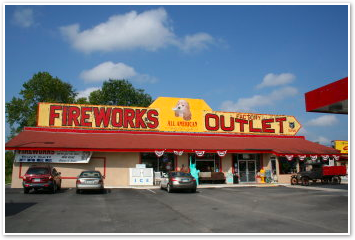 My first impression of Savannah is that the people here must have an amazing sense of humor. Because practically every tree in town is covered with Silly String! Man. I wish I would’ve been there for THAT day. 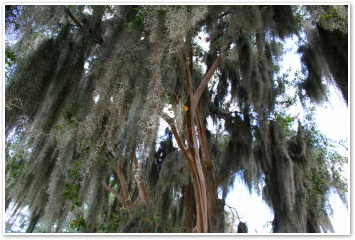 The silly-stringed trees are strange. They make everything feel sleepy. Almost like you’re walking through a dream. Everything looks normal, but there’s a surreal haze that hangs about the edges. You might even say that the haze is festooned. Because festooned is more fun to say.

The Savannah city grid is interrupted by 22 public squares. Each one featuring shady benches and a canopy of oak trees. Walk down the right streets and you’ll cross through a square every 2 blocks. Maybe this is why the pace in Savannah is slow as honey and the people are just as sweet.

Or, maybe it’s because they pump lithium into the public drinking water. My money’s on the latter.

Behind Savannah’s gold-domed City Hall, the landscape plummets 30 feet to the Savannah River. To get to the waterfront, you have to negotiate an awkward staircase of snaggletoothed cobblestones. Perhaps the very same awkward staircase that the Union soldiers celebrated on after whooping some confederate butt at Fort Pulaski in Georgia’s first Civil War battle.

As I gazed down over the masses of southerners meandering along River Street, I swelled with Yankee pride and couldn’t help but re-enact the victory.

“Boo-ya, Savannah! Who is thine daddy?!?!” I shouted, thrusting my pelvis and spanking the air.

A college student raised his fist in solidarity and shouted “WOOOOOOOO!”

Today, the only invaders on River Street are the armies of tourists who flock to souvenir shops, bars and restaurants. There are also candy-makers dishing out bits of praline and spiced pecans to anyone within arm’s reach.

Instead of buckshot, you’re bombarded with sketchy guys selling origami roses made out of palm fronds. How there’s significant enough demand to warrant a black market palm frond vendor every two blocks is beyond me. But they’re there nonetheless. So if you’re ever in a pinch for a really shitty, albeit unique gift, book a ticket to Savannah.

As I strolled along the waterfront, one especially shady palm frond “artist” stopped me and shook my hand.

I made a mental note to buy Purell.

He asked if I had a wife or girlfriend. Because he could make something “really special” for them.

I assumed he was talking about a rose made out of palm fronds and not a diamond tennis bracelet.

This was ok with the palm frond vendor. “How ‘bout you my man? I can make somethin’ special for you.”

I gave him by best what-the-hell-am-I-gonna-do-with-a-rose-made-out-of-palm-fronds look. Then politely declined in a tone that I hoped might suggest where he might put his palm fronds.

Here are a bunch of pictures from around Savannah: 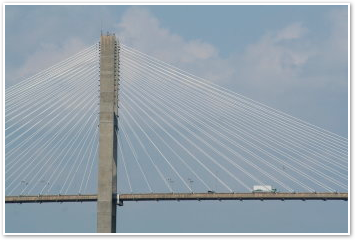 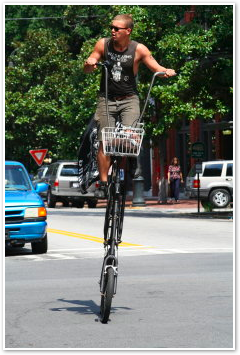 (You this this is impressive, you should see the guy’s car.) 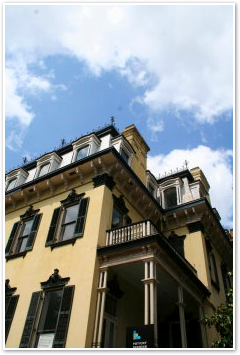 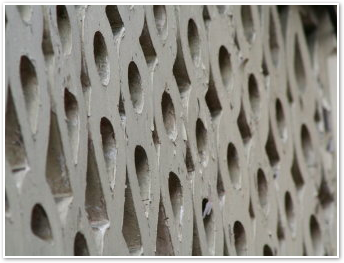 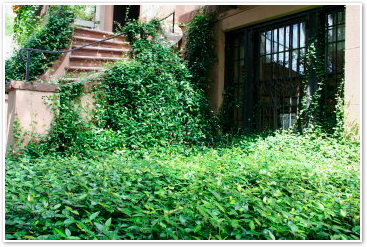 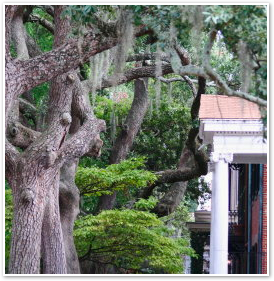 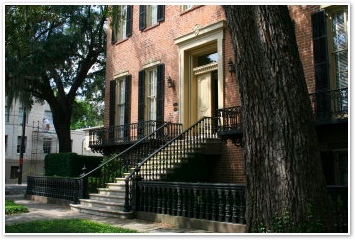 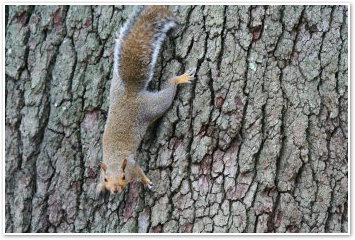 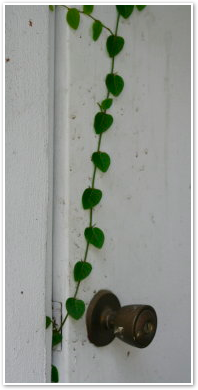 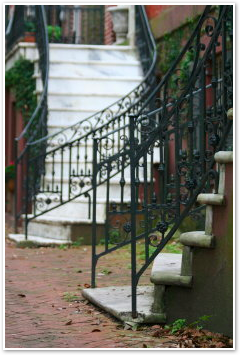 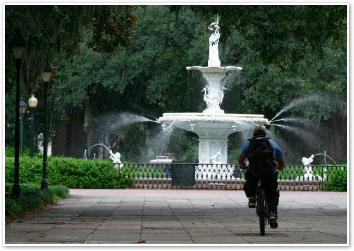 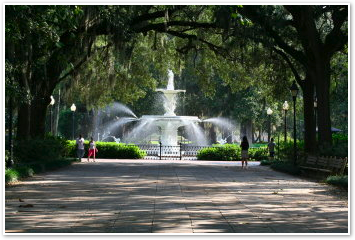 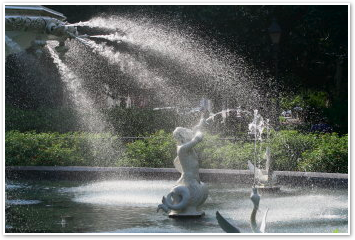 I’m often humbled by the size of the universe. When you gaze out at all the stars, at the sheer vastness of it all, you can’t help but feel insignificant.

Such is the experience of dining at Paula Deen’s restaurant, The Lady and Sons. The place is a meal factory. After standing in a line that wraps around the outside of the building, you check in at the Maitre D’ stand, halfway down the block. The Maitre D’ leafs through the pages on her clipboard, jots a quick note, then hands you a laminated index card. The card is coded by color and number. You bring this card around to the front door, where you hand it to a second Maitre D’. My card apparently said 3rd floor. The second Maitre D’ handed the card back and escorted me to the elevators. I jabbed the button for 3. The doors slid closed and I was whisked upstairs. There, I was greeted by a 3rd Maitre D’. I handed her my index card and noted that there are fewer checkpoints at the airport. Not amused, Maitre D’ number 3 adjusted her headset and summoned a team of border collies to herd me to my seat.

As ridiculous as the check-in process is, you can’t help but be awed by the efficiency of the place. The restaurant seats 330. Which means thousands of people come through for each and every meal. There’s a traditional menu, but most diners opt for the all-you-can-eat-buffet.

Here, an assembly line of servers frantically bail buckets of fried chicken from the kitchen to the buffet. I smiled, picturing the scene in the kitchen. Food rising from the floor like flood waters. The cooks, waist deep at this point, wildly shoveling drumsticks into buckets. Desperate to keep their heads above chicken.

I grabbed a plate and decided to pitch in.

All-I-could-eat turned out to be a lot more than you’d expect. The problem is, the buffet is huge, so you can’t help but stuff yourself silly. And, being the diligent student of cuisine that I am, I had to eat everything. Fried chicken, collard greens, cabbage, black eyed peas, pot roast, lasagna, macaroni and cheese, corn bread, lima beans, mashed potatoes, sweet potatoes, a cheese biscuit, a fried corn cake and peach cobbler. To name a few. 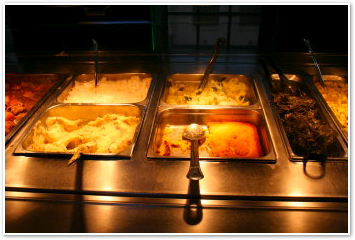 I’m pleased to report that the line around the building was for good reason. The Lady and Sons is comfort food at its very best. I overheard one diner say, “this is like the best dish that everyone’s grandmother makes. All brought together on one plate.” Or, in my case, three plates.

After cleaning the last bit of peach cobbler from my dish, I signed my check with bloated fingers and waddled to the elevator. I wondered if it could handle the weight. Fortunately, it could. The doors slipped opened and I lumbered slowly out of the restaurant, apologizing profusely to the buttons on my pants.

As I crossed the street, I turned for one last look at Paula Deen’s.

And that’s when I started hallucinating.

At least, I thought I was hallucinating. But I rubbed my eyes and they were still there.

I’ve always been skeptical about life on other planets. But this could not be mistaken as anything but.

Gripped by terror, every follicle stood at attention. I felt the blood rush out of my cheeks and the saliva from my mouth. 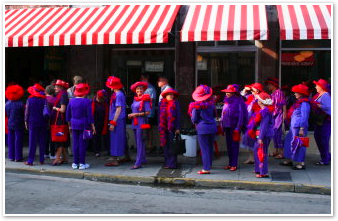 Despite the fear, I lingered. Sometimes you have to be brave in the name of photojournalism. Besides, without proof, who would ever believe me? I crouched behind a car and snapped a few pictures. 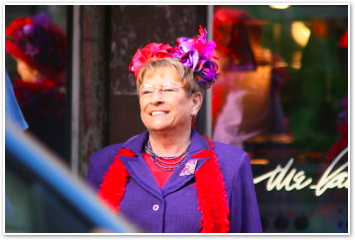 But then, one of them spotted me. (She must have sensed my camera shutter with her highly evolved hearing ability.)

She gestured in my direction. Soon, more started pointing and waving. Shit. My cover was blown.

My mind flashed to images of the mothership. Strapped down on an icy steel table. Spotlight glaring. The purple and red shapes poking. Prodding. Clucking.

That’s when I decided that they’d never take me alive.

They glanced around at each other, confused. No doubt to see if anyone had their translator device set to “English.”

Having created a brief distraction, I took the window to make my escape. I turned and ran as fast as my little Adidas could carry me.

I found my car two blocks away, slid across the hood action-movie-style and dropped into the driver’s seat. (I’m not positive, but I think my car groaned under the weight.) I turned the key, hit the gas and peeled out into oncoming traffic.

I never looked back.