The Inauguration of Barack Obama 1/20/09

(Back in January, I went to Barack Obama’s inauguration. I never really finished writing about it, but if I don’t post it now, I figure I never will. So please pardon the abrupt ending.)

Bleary-eyed, I opened the closet and began the lengthy process of pulling on layer upon layer of warmth. In all, the clothes weighed more than Malia Obama.

The layers in order of application:

I looked like a giant version of Randy from A Christmas Story.

We packed our six energy bars (of which we would eat one), a pouch of dried mango slices, an apple and two bottles of water and loaded into the car.

After picking up a friend in Federal Hill, we pulled into the parking garage at Baltimore’s Penn Station, surprised to find spaces still available. We clutched our commemorative Barack Obama MARC train tickets and climbed the staircase from the underground garage. The line snaked out of the front doors of the station and onto the sidewalk. A Baltimore City police officer directed us inside the station for the line for the P4 train, scheduled to depart at 6:20.

The train pulled into BWI rail station and a new mass of passengers stepped on board. They chanted O-Ba-Ma! O-Ba-Ma! Everyone all smiles and good cheer.

Another stop at Odenton and one more at Bowie State before the conductor announced “next stop, Washington DC.” The passengers let out a cheer and another round of O-Ba-Ma! O-Ba-Ma.

The train arrived a bit before 7:30. We stepped onto the platform and into the crowded Union Station. It was buzzing.

The B. Dalton Booksellers at Union Station had Obama paraphernalia on every available window display. Commemorative Magazines, books, newspapers and photos. 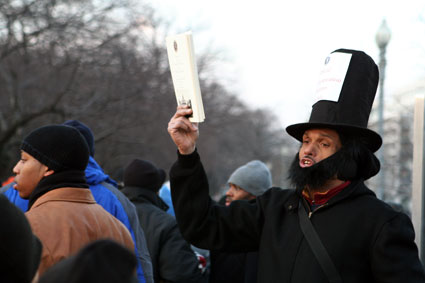 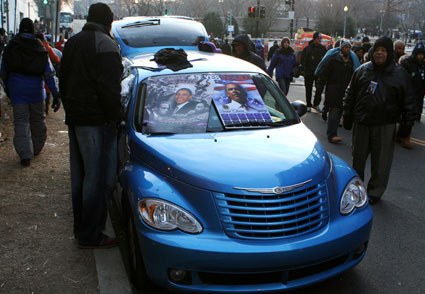 Over the next two hours, we followed a mass of people through a maze of streets. We followed D Street west, turned left on 3rd street and then down into the 3rd street tunnel. 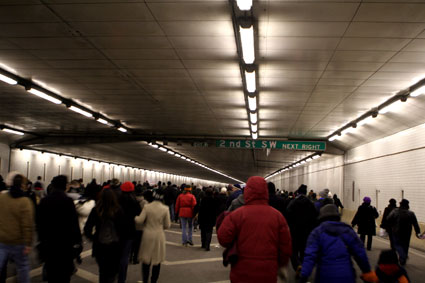 The tunnel led south beneath millions of cheering people on the mall and spat us out near the entrance to 395. From there, we traced the exit ramp and walked further and further from the Capitol, alternating blocks north and west. Every street was lined bumper to bumper with parked buses.

At 14th Street, the crowd pushed through a bottleneck and turned down Independence Avenue. Here we had our first look at the crowd. The lawn surrounding the Washington Monument was shoulder-to-shoulder people. A sea of smiling faces, knit caps and scarves. 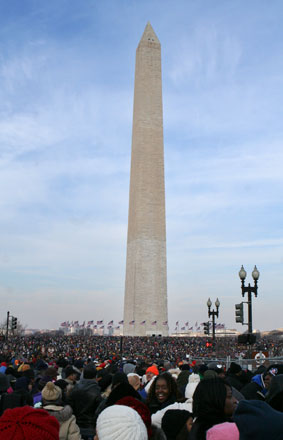 We ducked under a chain link fence, walked past The Great Wall of Porta-Potties and found a spot in a ditch right about at Jefferson Drive between the Washington Monument and 14th Street. It didn’t take long for the rest of the yard to fill in. Before long, there was literally not space for a single body in the grassy area in front of the Washington Monument –  a field that is about three blocks tall and one block wide. That’s to say nothing of the football fields upon football fields filled with people between the Monument and the Capitol. A few brave spectators climbed on top of the porta-potties for a better view, putting an incredible amount of trust into the structural integrity of a plastic room filled with unpleasantries. 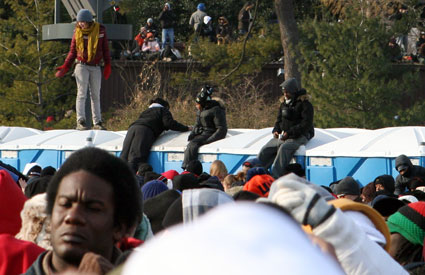 From there, it was a whole lot of standing and waiting. As we arrived on the mall, the jumbotron played the last of Sunday’s inauguration concert.

Then the inauguration celebration began.

The closed-captioning on the jumbo-tron read:

In front of us an African American mother had brought her sons down from Harrisburg, Pennsylvania for the day. They were fourteen and six. The six-year-old wore a puffy green jacket with a hood. He alternated between wiping his nose on the sleeve and head-butting his brother in the stomach. His mom turned to him and said “stop doing that. Why are you doing that?”

Finally it was Barack Obama’s turn to emerge from the doors of the capital to greet his 1.8 million fellow Americans. The crowd was jubilant, shouting, cheering, chanting. Yes. We. Can. Yes. We. Can.

Here are photos from the day: 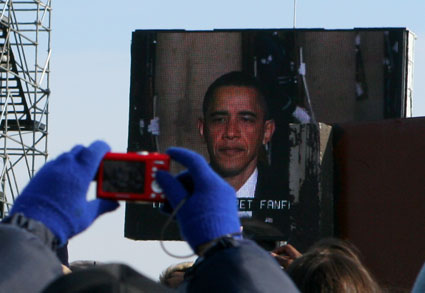 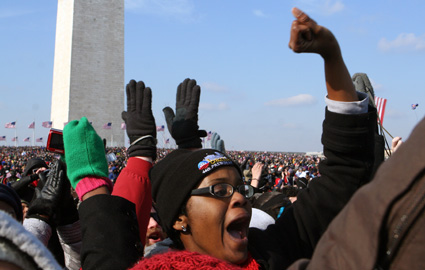 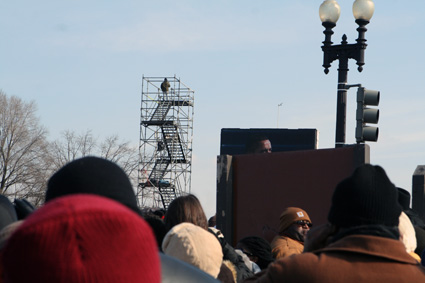 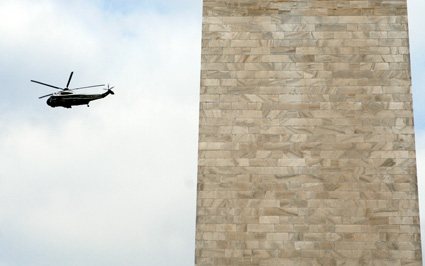