Beppe picked us up this morning to take me to the train station and my dad to the airport. I was sad to see my dad go, but excited to check out Rome. Wish he could’ve stuck around to see it too. It was a little sad to say goodbye to Beppe too. Hopefully I’ll be back again to visit sometime.

The train ride to Rome was a breeze. I took the Eurostar, which is kind of like the Amtrak Acela, except the Eurostar is on time. It only takes about 2 hours by train to get to Rome and it goes through some really scenic countryside.

On the train, I met a guy named Alessandro who used to work as an Account Executive for an ad agency in Milan. Nice guy, and it was interesting to hear about advertising in Italy. Sounds like most of the agencies are based in Milan and Rome, and most are part of the uber-conglomerate networks. He said there’s one big Italian owned agency, but the rest are WPP, Omnicom, etc. Now I just need an Italian portfolio. (I can see the TV spot now: “Dolce and Gabbana. Where is the bathrooms.”)

Cab drivers look exactly the same no matter where you go. The guy who picked me up at the train station had the wife beater and the stubble and the cigarette hanging out of his mouth and the raspy voice and everything. It’s like they all come from the same factory or something. But apparently this one was defective. He got the address right, but dropped me off on the wrong street. So I ended up walking 15 or 20 blocks with my big-ass suitcase.

The hotel in Rome, the Rezidenza al Corso, might be my favorite one so far. It’s a very small hotel – maybe 5 or 6 rooms on the second floor of a building. But the room is huge. And the furniture is really nice – all Victorian style antique stuff. The place has a ton of character. And my window looks out over Via del Corso – the main shopping street in Rome. It’s nice to leave the window open and let the sounds of the street performers drift in.

After dropping off my stuff, I decided to go check out the Vatican. Along the way, I stopped for a slice of pizza at a little pizza place just across the Ponte de Margarita (meaning “the bridge of tomato, mozzarella and basil”).

I was floored. It was SO good. In Rome, the pizza is made in these 2 foot long rectangle pans, and cut into squares. The crust is a little thicker than the thin crust NY style, but not nearly as thick as deep dish. And it’s really crispy on the bottom. I don’t even know what to compare it to. Maybe like a cracker, but not dry.

The pizza I had today was scattered with torn bits of fresh mozzarella, really ripe Roma tomatoes and arugula. I could have eaten all two feet of it. Chalk up another one for the register of frustration and deprivation. They don’t make pizza like that back home.

When I got to the Vatican, I tried to see the Sistine Chapel but the Swiss Guard guy told me that it was closed and that it would be open again on Monday. Bummer. 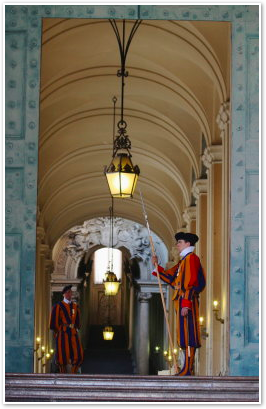 The Swiss Guard is an elite group of 100 highly trained military personnel, charged with defending the Vatican. 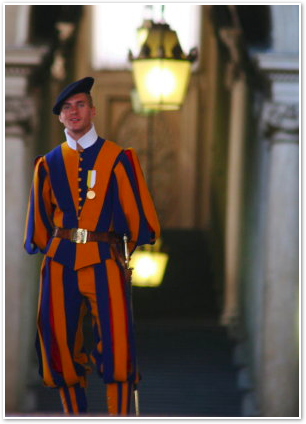 According to Wilkepedia, “Not only are the guards fully trained and equipped in modern tactics and weaponry, they also receive instructions in using the sword and halberd.”

Halberd is a deadly form of guerilla warfare, where the Swiss Guard use their camouflage to blend into their surroundings. When the time was right to attack, the bearded lady never knew what hit her. 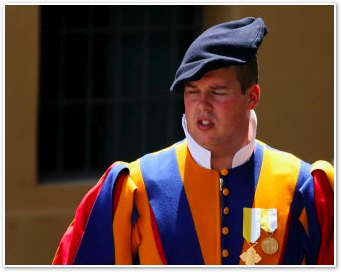 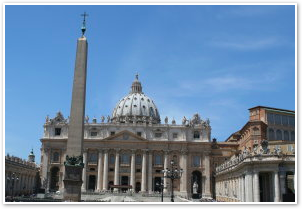 It was pretty wild. It’s HUGE. And just about every millimeter of wall and ceiling are carved with gold leaf. Inside, I took a lot of pictures of important stuff. I’m not sure what any of it was. But everybody else was taking pictures of it, so it must’ve been important. 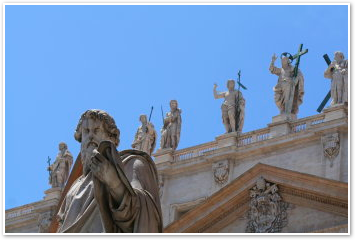 At the Vatican, I also learned that 9 out of 10 Nuns prefer the taste of Lipton Iced Tea. 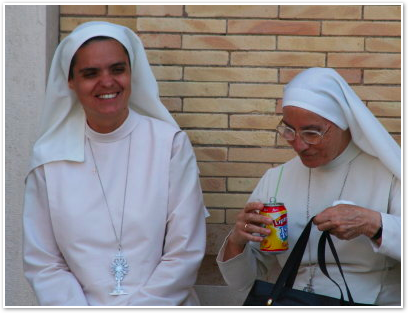 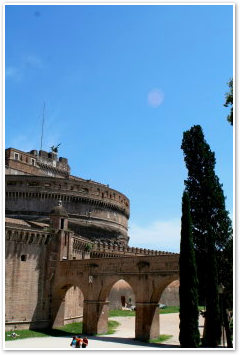 It was built in the 30’s (the 130’s) by Hadrian as a Mausoleum and then converted into a castle by some guy who wanted a castle. 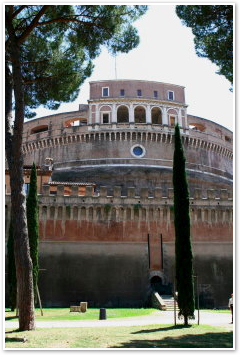 More recently, the castle was made famous in Dan Brown’s book “Angels and Demons.” (the prequel to The DaVinci Code) In the book, the castle provides the setting for the secret Illuminati lair. And the climactic scene where Robert Langdon battles Skelator.

The Castle was really cool. To get in, you go through these circular ramps in the center of the building (this was part of the Mausoleum).

Once upstairs, the views of Rome are stunning. There are a bunch of rooms that have been converted into a museum featuring lots more paintings of people with halos. Actually, there was one cool painting from a long time ago (circa 0-2005) of the Grand Canal in Venice. I would post it here, but they don’t let you take pictures in the rooms of the museum because they don’t want their artwork turning up on people’s blogs. Lucky for you, I have a photographic memory, and have created a flawless recreation of the painting: 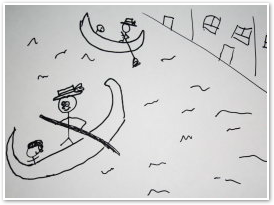 The castle also had some of the old tools and stuff that the people used.

This one is an ancient catapult, used for flinging ancient cream pies into the faces of enemy forces.

Here are some random pictures from inside of the castle: 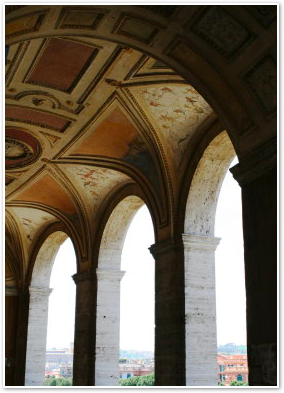 At one point, you go through some really elaborate rooms where the people in the castle lived. Then you walk up a narrow staircase. As you’re going up the stairs, you can hear a woman singing opera music from the room at the top. You expect to see another breathtakingly elaborate room with more gold leaf and painted ceilings. Instead, you see this:

An 8 foot tall rag doll sitting on the floor with big goofy animated lips projected on her face singing the opera music. It was HILARIOUS. I wish I could’ve taken her home. The whole section was this great modern art exhibit. 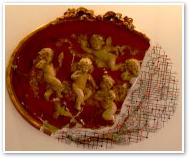 There was also a fake living room where everything – the couch, the pillows, the TV, the pictures on the wall – was painted white. And there was a three walled projection screen thing where they were projecting footage of beefcake guys lifting weights in a gym. At the center of the scene was a pedestal with a diamond studded dumbbell. Unfortunately I can’t seem to find anything about the exhibit anywhere on Google.

After the modern art exhibit, you come out to the highest roof of the castle. The view is stunning – all of Rome is spread out below. You can see all the way to Baltimore. 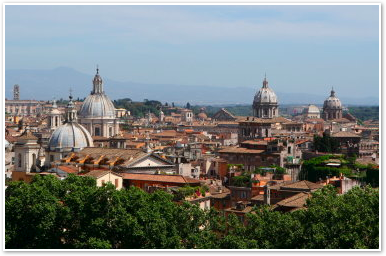 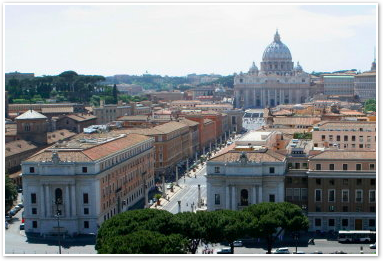 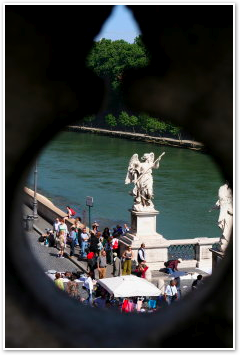 In other news, I’ve got 3 of the 4 Ninja Turtles covered. On the way back to the hotel from the Castle, I stopped to see the Pantheon.

I didn’t realize it while I was in there, but apparently Raphael is buried inside. Now I just need Leonardo. Although I’m guessing he had something to do with something I’ve already seen. He was very prolific for a reptile. 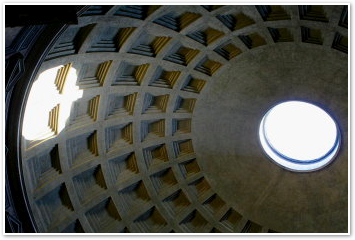 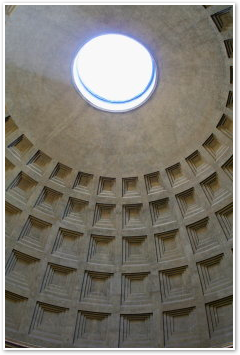 I came to Rome with the intention of trying to figure out what the hell “When in Rome…” means. Apparently it means sit and people watch. I followed the masses of to Piazza di Spagna. The piazza has a huge staircase where everyone hangs out and struts their chest hair.

I was determined to stay awake and go out for one night on this trip and decided that tonight was the night. After all, it was Saturday night. (And when in Rome…) Problem was, I had no clue where to go. The waiter at dinner told me that I have to go to the Disco Pop. Apparently the Disco Pop is the place to be on a Saturday night. Lots of beautiful girls. I will like the Disco Pop, he told me. Problem is, me dancing alone at an Italian Disco Pop would be like Al Roker riding a horse in the Kentucky Derby.

So I decided to take a walk and follow some random Italian guys who looked like they were all guido-ed up to go out. (This is not hard to find on a Saturday night. Just look for the air that looks smoggy. That is where you will find the cologne.)

I followed three guys to a Piazza a few blocks from the Pantheon, where there was a rock concert going on. The atmosphere was festive. And kind of funny. Because the people at the concert COULDN’T DANCE to save their lives. (and that’s saying something, coming from me). Lots of random hopping and shifting awkwardly from foot to foot with no discernable acknowledgement of the song’s rhythm. It actually gave me hope that maybe a Disco Pop wouldn’t be as painfully awkward as I envisioned. In fact, I might just look like Fred Astaire.

I was clearly the only non-Italian at the concert. Definitely felt a little like Bill Murray in Lost in Translation.

After the band wrapped up their set, I found some more guys in tight shirts and followed them back towards the Pantheon. They walked into a pub. (Mercifully, not a Disco Pop.) The sign outside promised “Crazy Night, every night until 4am.” Inside, it wasn’t so crazy. Not dead, but a long way from crazy.

I ordered a Heineken. And then something caught my attention. The people in the bar were talking to each other. And I UNDERSTOOD THEM! Turned out that I had lucked into an American/Canadian/British/Australian pub crawl from one of the Hostels.

After making quick friends with some of the folks on the pub crawl, I tagged along with the group of 15 or so for the rest of the night. It was a lot of fun. There was a real estate agent couple from Hawaii, two sisters from Chicago, two guys from Detroit, a couple from Australia, a handful of folks from Oxford and a really socially awkward guy from the middle of nowhere British Columbia. (He randomly disappeared halfway through the night. Perhaps to go to the Disco Pop.).

The second stop was at an Irish Pub near the Largo di Torre Argentina. It was the strangest Irish Pub I’ve ever been in. It looked like an Irish Pub. But there was a disco ball and bump-bud-a-bump-bump music playing.

By the end of the night, I learned that bump-bud-a-bump-bump music music is the ONLY music ever playing in Rome. You’d think the Black Eyed Peas were the only CD in the entire city.

After one more stop at some cool castle-y looking bar (also playing the Black Eyed Peas), the Hawaiians and I managed to find a taxi stand and I headed back to the hotel. I didn’t have a crazy night until 4am. But I did last until 2ish. Which is last call back home. And that’s good enough for me. Since my crazy nights usually end well before 11.

Some other random pictures from the day in Rome: 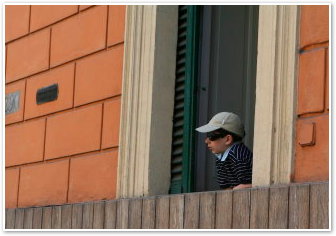 I can’t decide which cropping I like better on this picture, so you’re getting both. 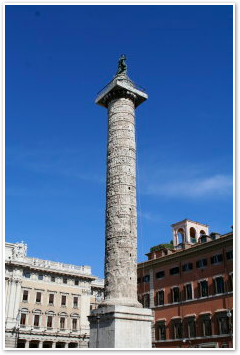 Dinner was at some random pizzaria by the Fontana di Trevi. 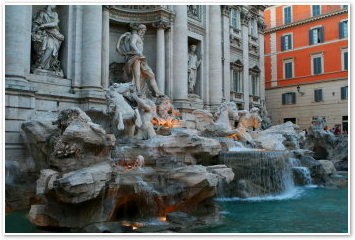 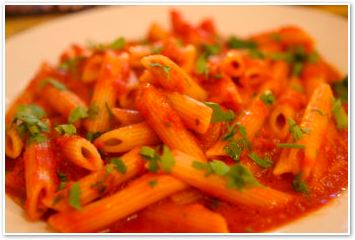 By far the worst meal of the trip. I could’ve done better at McDonalds. The pasta was overcooked and the sauce, which is supposed to be spicy, was bland and one dimensional. After eating it, I walked into the kitchen, spit in the chef’s face and insulted his mother.

(No, no! You’ve got the wrong idea! This is a customary sign of gratitude in Italy. If you really enjoy your meal, storm the kitchen, spit on the chef and call his mother an ingrateful dog. Seriously. You should try it. When in Rome…)