There’s a crazy guy in Rome who sits on the steps of the church, holds his knees and rocks back and forth, frantically repeating the same phrase in this raspy sing-song. I wish I knew what he was saying. Probably something like “the end is near.” But I wouldn’t be completely shocked by “Your call is important to us. Please stay on the line.”

In the morning, I walked down to see the ruins. After seeing them, I can say that one thing is for sure: whoever ruined them is in BIG trouble. The ruins are a mess! Everything’s broken!

For some reason, the security guys started shouting at me when I tried to super-glue some of the stuff back together.

Sheesh. I was just trying to help.

At least I feel a little better that this guy is on the case.

There’s one place where you can go inside some of the ruins. It was pretty wild. Cause I never realized the ancient Romans had the Super Bowl. 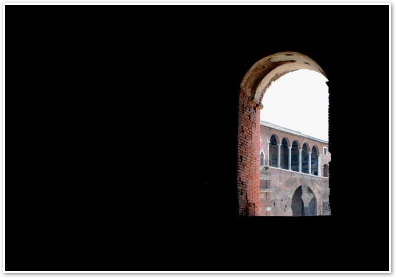 This is a statue of Caesar, a great leader and true pioneer in the history of salad.

Here are some other random pictures from around the ruins:

I don’t know what this building is, but it must be really important because it has armed guards out front. Either that, or the armed guards have the wrong address. 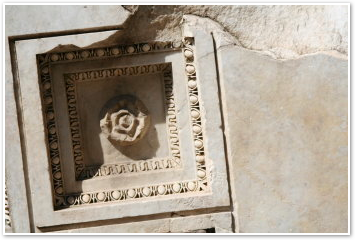 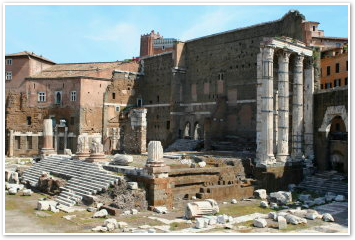 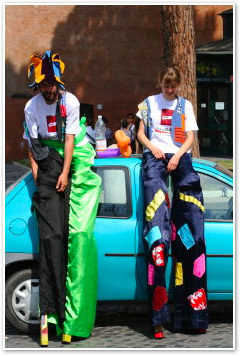 These people are REALLY tall. I’m still trying to figure out how they fit in their car.

I also did the mandatory trip through the Colosseum. You see a million pictures of the thing, but actually being there is a lot different. It seems less mystical and more like an actual, tangible place. Maybe it’s just me. Or, maybe it’s just the gift shop. Unfortunately I couldn’t convince anyone to play in a pick-up game of lion wrestling for old times sake.

People have no appreciation for history. 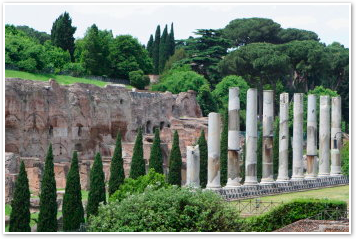 (This one is taken from the second level of the Colosseum, looking out) 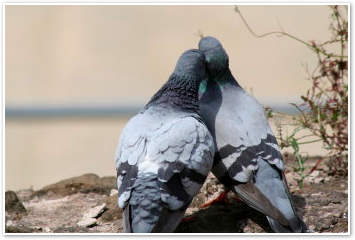 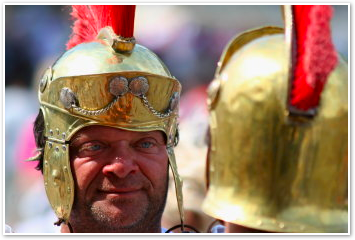 A face only an Emperor could love. 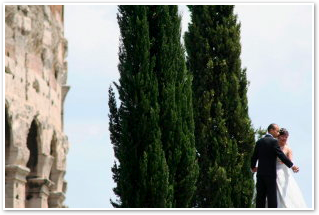 Everyone gets married outside of the Colosseum. There were literally four weddings within a one block radius. Couldn’t help but wonder if anyone’s ever accidentally run off with the wrong bride. (This would no doubt be followed by romantic comedy-style hijinks. Probably involving Hugh Grant and Rowan Atkinson.)

Trastevere is a really cool artsy neighborhood. Lots of galleries and restaurants. I stopped at one, Il Ponentino, for lunch. (A restaurant. Not a gallery).

People in Italy look at you like you have a goat growing out of your head if you ask for a table for one. I guess dining alone isn’t too common here. The Maitre’D stuck me at a table inside so as not to offend the outside diners by seating a leper among them.

After the initial rejection of being an Italian social outcast wore off, it actually ended up being really cool. The chef was my waiter. He didn’t speak any English. So the entire meal was ordered and discussed in a combination of my “One Day Italian for Tourists” and over-exaggerated hand gestures. It was actually pretty fun trying to get by for a whole meal without a word of English.

Inside, I got to watch the guy working the pizza station. He reminded me a bit of Bruce Willis, and sang really badly in Italian while he was cooking.

I nodded. (Which is Italian for nodding.)

It was all VERY good. The bruschetta was the best of the trip – the bread was perfectly crisp around the edges and drizzled with really nice olive oil. The tomatoes were gorgeous. So fresh and so much flavor.

The artichoke was really delicate. I’m not entirely sure how they prepared it – I’m assuming steamed or braised in wine? Then they drizzled it with olive oil and a few grinds of black pepper.

The spaghetti al pomodoro was absolutely perfect. The sauce was SO good. I could eat that every single day and never get tired of it. I finished the whole thing, despite the fact that I was stuffed about half-way through the plate.

After I finished, the chef came back out. I told him that “it was all very good.”

He asked if I wanted something else.

Then he told me, “no, you want Veal Scallopine.”

He said, “no, no. You want Veal Scallopine. I’m going to make it special just for you.”

So I had the Veal Scallopine.

Despite the fact that I had no room left, the Veal Scallopine was really, really good. It was in a white wine butter sauce and the meat was perfectly tender. I’ve probably only had Veal Scallopine maybe once or twice before, but I imagine this is probably how it’s supposed to be done, because it just seemed perfect.

Also, now I can check off “get veal forced on you by a surly Italian chef” from my list of things to do before I die.

At the end of the meal, I found out that the chef spoke some French. So we talked in French for a bit. Though my French is REALLY shaky. I told him that I don’t understand Italian, but I understand food and that the food was terrific. I also told him that I will definitely come back to the restaurant the next time I visit Rome.

At least, that’s what I think I told him. I might have told him that “I like my socks very nice and it is good to rollerskates, monkey.” That would explain why he was smiling and nodding so much.

After an espresso, the chef brought the bill and I paid by credit card. But there wasn’t anywhere to leave a tip. They’re weird about tips over here. Italians don’t tip. So I guess you’re not really supposed to either. I tried to ask if I could write in a line for the tip on the receipt and he said, no. He said (in overly condescending Italian), “Here’s what you do. You write your name on the receipt. And then you take your credit card. And I take this receipt. And then you go walk out the door.” Kind of funny how sarcasm translates even when the language doesn’t.

So I took my credit card and left.

But not before leaving 5 Euros on the table for tip.

In Trastevere, there’s graffiti everywhere. But it’s cool graffiti. Some of it’s really well done and artisitic and sometimes funny. It seems out of place in such a good neighborhood. But it sort of fits the personality. 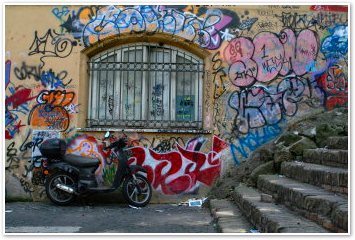 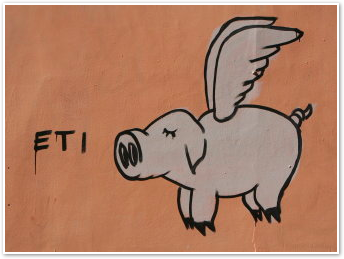 There are also a lot of dogs in Trastevere. All of them are really tired. 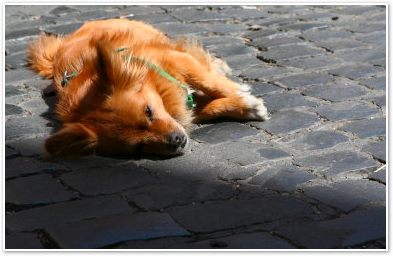 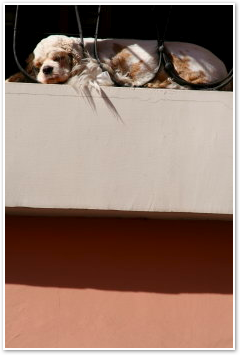 All of the waiters are really tired too.

Trastevere also has a lot of stray cats.

Some were hard at work producing more stray cats.

After walking around a bit, I sat down at the Piazza di Santa Maria and hung out for a bit and took pictures. 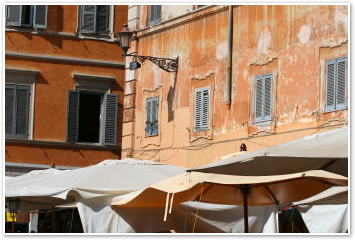 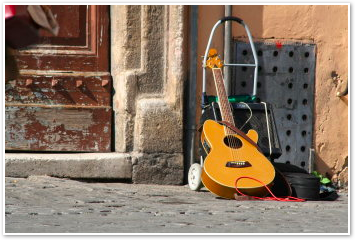 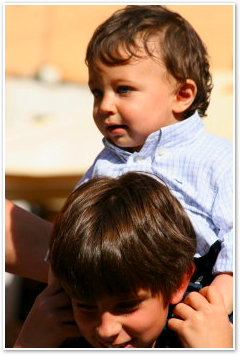 Here are a few other random pictures from Trastavere: 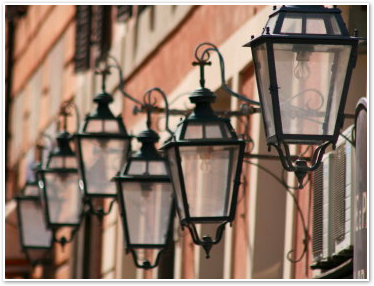 On the way back, I took a different bridge, which crossed over Isola Tiberina. It’s a very small island in the middle of the Tiber that houses a hospital. It also has a promenade around the base that people use for tanning, fishing, and riding bikes in banana hammocks. Hot. 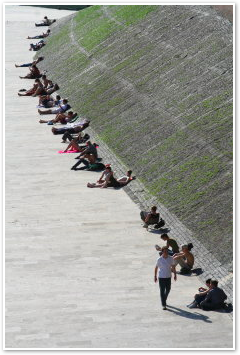 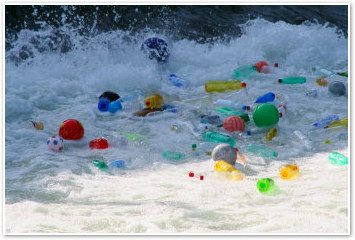 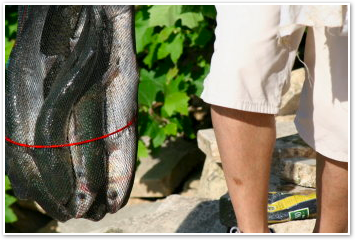 This guy had caught 8-10 of these giant fish in the river. The guy on the bike had one down the front of his speedo. 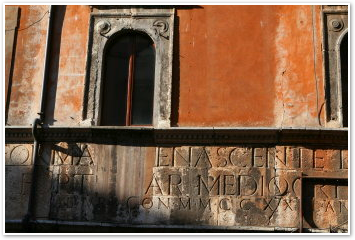 After a quick stop in the hotel, I headed back to the Piazza di Spagna to sit and people watch. Cause when in Rome. 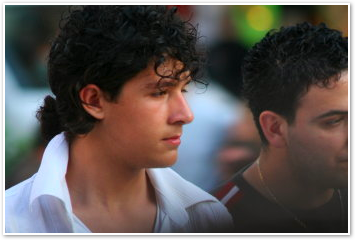 This guy had a real nose for photography. (Get it? Nose? Oh nevermind) 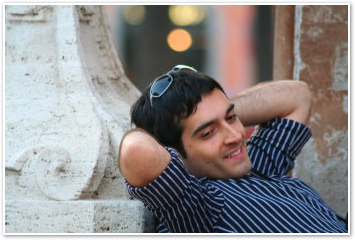 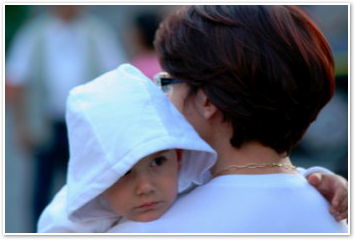 I wasn’t hungry for dinner, but ate it anyway. I stopped at a little pizzaria by the Pantheon and had Zucchini Pizza.

It was ok. Wasn’t the best. A little too heavy on the oil.

Today was a two-gelati day. The first one was from a hot dog/gelato/panini/dry cleaning truck outside of the Colosseum. Straticella. Even the trucks here make better gelato than the places back home.

Keeping with the gelato-at-ancient-landmarks theme, I had Pistaccio at the Pantheon. (Mainly because I liked the alliteration.)

Perhaps it was the very same gelateria that Rafael went to?