The Long and Boring Road

This is Natty at 8:00am. Excited. Bright eyed. Totally pumped to go for a ride in the car. 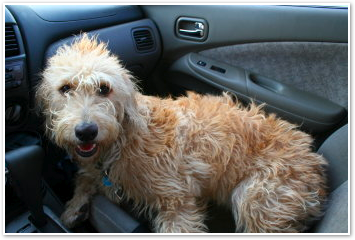 Little did she know, the ride in the car was going to take 9 hours.

This is Natty somewhere in North Carolina (with a good 4 hours still to go).

If you’d like to know what it’s like to drive to Charleston, South Carolina on I-95, print this picture out and stare at it for 9 hours.

That’s all you see. Trees on both sides of the highway. No scenery. No nothing.

Except billboards. And even those were boring.

“Smithfield Ham and Yam Festival. May 6th and 7th.”

This one was interesting. In part because it was now mid-September. But also because it allowed me to spend the next few miles imagining what the Smithfield Ham and Yam Festival might entail.

My mind drifted to images of large German men hurling yams across a field like shot put. The children cheering wildly as their mothers wipe bits of ham from the corners of their mouths.

There would, no doubt, be live polka music.

Across a field, local farmers would sit in anticipation at long folding tables, hands bound behind their overalls. Miss Smithfield Ham and Yam Festival 2006 would straighten her tiara, smile and wave to the small crowd. Then, she would cock the pump on her shotgun and fire it into the air. The farmers would plunge face-first into mountains of glazed ham. Pineapple juice and maraschino cherries clinging to their beards.

Next would come the men’s competition.

Elsewhere, a portly man in a tattered pig costume would be walking around the festival grounds. Occasionally, he would kneel down and try in vain to hand out yam-shaped balloons to the screaming, horrified children of Smithfield, North Carolina.

Suddenly, I found myself wishing it was early May.

But alas, the Ham and Yam festival was now just a distant memory. The blue ribbon yam displayed proud and shriveled on a Smithfield mantle.

So I returned my attention to the 200 miles of pavement still to come.

I penciled it into my calendar.

As I sailed past towns like Lumberton and Garysburg, Pedro’s puns became progressively more amusing.

Either that, or I grew progressively more insane.

Several exits later, I chuckled at a billboard with a giant hot dog on top. It read, “You never sausage a place!”

Natty awoke just long enough to give me a dirty look. Then circled the passenger seat and slumped back into unconsciousness.

By hour 5, I was looking forward to the next South of the Border billboard like it was a TV drama. What would happen on the next board? I was rapt.

With two miles still to go, I spotted something on the horizon. “Is that what I think it is?”

I clearly had to stop.

South of the Border was obnoxious. Tacky. Offensive. In short, everything I’d hoped for. 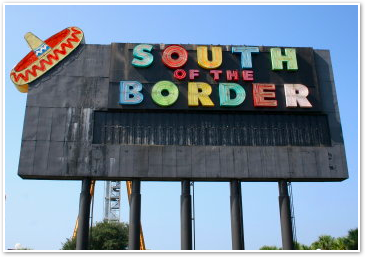 I made a beeline for Pedro’s gift shop and bought a booklet full of South of the Border billboards. It was fifty cents. I also found the perfect gift for my art director, Helen. A roll of toilet paper. On the outside, it read “Generic toilet paper for cheap assholes.”

She would love it.

After a brief visit to Pedro’s urinal and Pedro’s gas station, I merged back onto I-95 to finish the final leg of the trip.

In South Carolina, every exit had a massive fireworks discount shop. Each store boasting bigger stockpiles of explosives than the next. It was like an unspoken cold war. An out-of-control arms race of bottle rockets and roman candles.

I decided at this point to try not to piss off South Carolina.

Aside from the alarming display of firepower and the occasional Bojangles Famous Chicken and Biscuits, South Carolina was mind-numbingly boring. It was like driving through the world’s largest sensory deprivation chamber. By mid-state, I started to get the sneaking suspicion that I was driving in a big circle.

“I swear I recognize those trees.”

Generally speaking, recognizing trees is not a sign of good mental health. Neither is accusing the trees of following you. But I did that too.

Just when I was fairly certain that we were making no progress whatsoever, I got a sign.

This was followed by uncontrollable giggling for the next 23 miles.

At 5:37, after nine plus hours of driving, we finally pulled into the driveway of the rental house on Isle of Palms, South Carolina. Eyes bloodshot and twitching, knuckles stiffened into permanent fists, I pushed open the car door. As I stood up, my pants made a Velcro sound against the driver’s seat.

My parents greeted us with a hug.

Then said, “Get back in the car! We’re going to dinner!”

Because you care. I stopped for lunch at Moore’s in Kenly, North Carolina. Moore’s Carolina BBQ is quite possibly the best $6 money can buy.

(Unless, of course, the $6 is going towards one of these babies.)

I got the pulled pork. It came with hush puppies and two sides (I had black eyed peas and cole slaw). 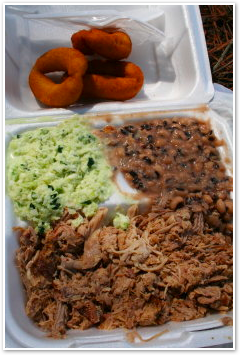 Carolina BBQ is a lot different than the saucy BBQ that I’ve had before. It doesn’t come with a red sauce, instead it’s served in a kind of vinegary, mustardy au jus.

For dinner, we got take out from some random bar on the island. I tried fried Alligator. 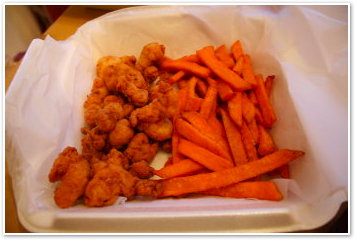 I know it’s cliche, but it really does taste exactly like chicken. The texture’s a little chewier and the color’s a little redder. But aside from that I’d never know I was eating gator. I also had a shrimp po’ boy.

The dinner sucked ass. But I ate it with a smile. Because I didn’t eat it in my car.